You can download our Free "Guide to Karting" by clicking here!

Established over 50 years ago Mansell Kart Racing Club has grown from the early roots of karting and motorsports interests in the UK.

Based in the west country it had early links with Exeter and Plymouth Kart clubs which are no longer on the karting map, but the two clubs have since left a legacy of experienced drivers and enthusiasts who are now using their skills at Dunkeswell and other UK circuits. Like our present day club many of the UK’s early Motor Sports organisations used some of the old American and RAF Airfields which were left behind after the the ‘Yankee’ soldiers and Battle Groups from America and Europe departed at the end of the last war. Many of these great Landing Strips have now been dug up, returned to arable pastures or redeveloped, but fortunately the early Club was lucky to have a good group of dedicated Karting and Motorsport enthusiasts to seal the fate of part of the old Airfield Fuel Bay and Runway and put the area to good Sporting use.

Although the Race circuit of today is situated on the southern side of the Blackdown Hills – recognised for its outstanding natural beauty, those early days at Dunkeswell or any other venue were rustic to say the least. Some parts of the early airfields were surfaced in concrete and most were left open to the elements, barren and in disrepair which meant a bumpy ride for those early drivers who sought to experience the thrills of driving at speed.

The original ‘Go Karting’ concept was developed over 40 years ago in 1950s America. The idea was soon to spread to the UK, Europe and across the continent thanks to some innovative developments in chassis design and adaptive use of early motorcycle and motocross engines in the 50s and 60s by companies such as Villiers, Ariel, Montesa, Baltacco and McCulloch.

By 1961 the Italian manufacturer, Parilla, had produced the first Rotary Valve induction engine which effectively opened the door to the future of 100cc Karting developments. As Kart Racing became popular here in the UK and abroad we saw the birth of today’s recognisable names such as Tal-Ko (TKM), Ital, Honda and Dap.

Whilst Zip Karts carried the Komet engines of the early 1970’s and Dap sought to put the Dap T70 on the worlds race grids, Dunkeswell was proving ever more popular as a venue for race meets and was holding Car Sprint and 200 and 250cc kart events in conjunction with local and UK kart and motor clubs. Kart Racing at this time was still an adult sport but thanks to the work of JJ Blow the cadet kart concept was born out of the innovative use of an industrial engine bolted on to a small chassis. Coupled with the important advent of a new Junior Britain class Go Karting was to become available to young junior drivers throughout the UK.

A lot has changed since those early years, Kart Clubs such as Plymouth and Winkleigh have gone and new classes have seen the demise of those early machines but we now have a fantastic choice in chassis and engines to race which suit any driver at all levels, whilst race venues, UK, European and World Karting Championships have seen great names such as Ayrton Senna, Michael Shumacher, Ivan Capelli, Heinz Harald Frentzen, Jarno Trulli, Nigel Mansel,Vestappen and Fisichelle and Jenson Button (to name a few) go on to win drives in Formula One and other Motorsports. Like many of the UK’s circuits, Dunkeswell race circuit has gradually been transformed by the club from a rough piece of open ground once held by the MOD to a Kart and motorsport venue which has been used by thousands of racing drivers of all skills and ages coming from all areas of the UK. The transformation has been an on going project and is often a slow process but new ideas are under constant review and are likely to be implemented over the next five years. Such ideas include corporate hire facilities, track extensions and a number of improvements which will enhance the area both for the club and its members, our neighbours and visitors and tourists which are vital to the Rural Devon economy. 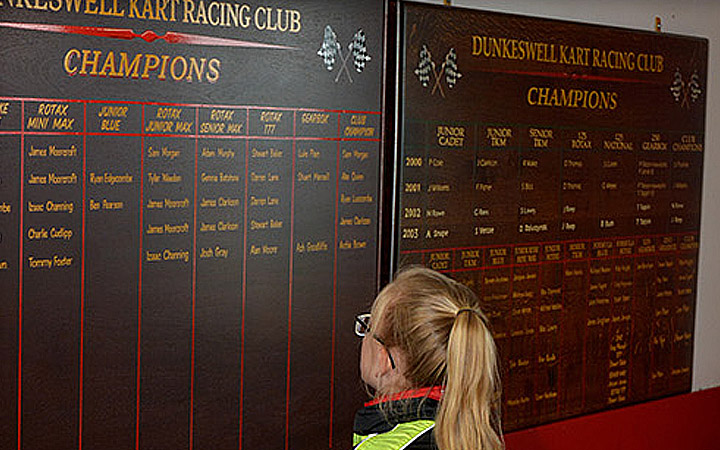 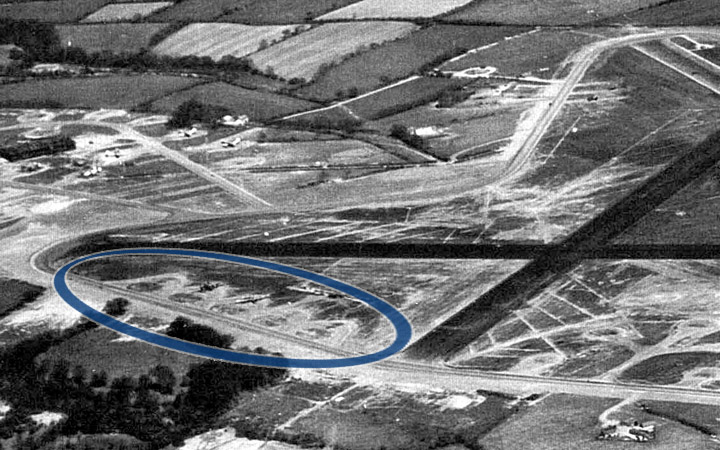 When you stand at Dunkeswell today and look out across the circuit and airfield it is hard to imagine the thousands of Airmen and troops going about their daily bombing raids and naval duties in the 30’s and early 40’s when the airfield encampment grew almost to the size of a small town. Since The race circuit was established the area has been improved to provide good road access and tarmac pit space for competitor use and the circuit has seen a number of changes to provide a safer environment for drivers to enjoy their sport. The South West Rally School has recently been established nearby on what previously had become a motocross track and the Dunkeswell airfield is now a thriving airfield which plays host to a number of Airsport activities including microlight flights, Parascending, and Stunt flights. A business park has been built at the Village end of the airfield on what was redundant land and the Dunkeswell Air Club provides excellent catering facilities and a memorial museum for visitors. A children’s play area is also available as is outside catering and carvery. Being only a few miles from Honiton (once famous for it’s lace) overnight accommodation in the area is plentiful and for those with a thirst to quench (after racing of course) the local Inn at Dunkeswell is a welcome place to settle.

Aided by the formation of the ABkC in the 1960s along with RAC and MSA recognition of the sport, Kart Racing has grown both nationally and internationally to become a high performance sport which has given many of our past and present day ‘Stars’ a sound gate of entry into professional Motorsport at all levels. Some drivers are happy to enjoy the sport at leisure levels and never seek a hot seat in Formula Ford, Renault, F3 or F1. In some ways this is what makes Karting special as you don’t need to be a professional or have high aspirations to enjoy the fun. There’s plenty of action and competition both at club level and nationally and more importantly it is open to drivers young and old, male or female, with or without a road licence! At Dunkeswell our club is keenly focused on MSA licenced racing but we also encourage the use of the circuit for test and practice by owner drivers who seek to improve their skills in a racing environment. Regular competitors and officials have race and motorsport experience and we have a great team of dedicated Marshalls to look out for you on Race Days. We are a friendly club with a wide membership of both racing and non racing members from novices to experts. In fact some of our experts are so helpful they deserve a place on the podium too!

Regular events held at the circuit include our Club Championship, NKRA, Wessex and South West Champs which are open to drivers of all levels of expertise driving a range of high performance Karts from 60cc Cadet to 250 Gearbox. We also hold several sponsored championships throughout the year in collaboration with for example Kastner Volvo and Carlton West country TV. Past events have also included rounds from the national Super 1 Championship which we hope to hold again after circuit and venue improvements in the future.

As a member club of the ‘ Devon Four Motorsport Partnership’, Association of South Western Motor Clubs (ASWMC), Association of British Kart Clubs (ABkC) we hope to provide those with Karting Interests with a stepping stone to other forms of Motorsport. Of course you don’t have to be a Kart, Single seater or car driver to enjoy our sports as our gates are open free of charge to spectators and visitors on Saturday Practice Sessions and you are invited to enjoy views of the Airfield activities and Race Day excitment from our Track Side parking areas for a small fee on Race Sundays.

If you are interested in any of Dunkeswell Kart Clubs Sporting activities the club can be contacted on most days by telephone, email or post and you are welcome to visit us and see some of our drivers in action at the circuit.

Membership is open to all local and UK Kart drivers, friends, families and groups of any age.

Established over 50 years ago Mansell Kart Racing Club has grown from the early roots of karting and motorsports interests in the UK.

You can find out more about which cookies we are using or switch them off in settings.

This website uses cookies so that we can provide you with the best user experience possible. Cookie information is stored in your browser and performs functions such as recognising you when you return to our website and helping our team to understand which sections of the website you find most interesting and useful.

Strictly Necessary Cookie should be enabled at all times so that we can save your preferences for cookie settings.

If you disable this cookie, we will not be able to save your preferences. This means that every time you visit this website you will need to enable or disable cookies again.

This website uses Google Analytics to collect anonymous information such as the number of visitors to the site, and the most popular pages.

Please enable Strictly Necessary Cookies first so that we can save your preferences!